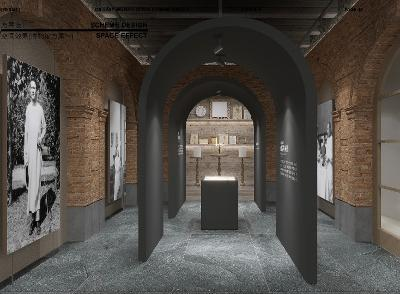 During a trip to Shanghai last week, I had the opportunity to visit the Tushanwan Museum, a place I had heard about a few years ago. Located just two blocks from St. Ignatius Cathedral in the bustling central district of Xujiahui, the museum is an example of what happens when Chinese historical appreciation meets Church history.

Standing in front of the museum entrance, it took patience to find a way to use my cell phone to scan the codes to generate an entry ticket and also to view proof of a recent negative Covid test. The stumbling effort gave time to have a humorous conversation with the service people at the entrance. After negotiating the electronic barrier, a transfer to another era quickly made itself felt.

The newly renovated museum is a thoughtful presentation of Shanghai’s Church history. The late 19th century photographs are accompanied by written explanations in Chinese and English, with an occasional area having an explanation in French. Different sections focused on the dedicated efforts of the Church in its pioneering work in education, art, orphan care, health care, stained glass, printing as well as the development of faith.

Perhaps a space restriction led to omitting the pioneering work of Jesuit missionaries on the outskirts of the city to set up China’s first seismic monitoring center and large-scale observatory in Sheshan, which are both well registered on their respective sites. A surprising part of the Tushanwan Museum’s positive presentation of the Church’s contribution to life in Shanghai is that the museum is a project in which the local government is the key player.

There seems to be a flexibility in the Chinese collective mind to place the history of a religious institution in a neutral and safe category, a category that can be seen as quite different from the discussions of civil authorities on the current role of the same religious institution.

A similar historical perception seems to apply in the heart of Beijing where a detailed explanation of Christianity’s first known arrival in China is displayed in the National Museum. A large scale hard copy of the text of the famous 8th century Christian stele in a museum in Xian is accompanied by explanations describing how the three meter high stone sculpture was carved and engraved to commemorate the 150th anniversary of the the arrival of Christianity, the religion referred to at the time as the “religion of light”.

The National Museum is located on one side of the historic city square that forms the heart of Beijing, the other side of the same square being the location of the huge assembly halls where the largest political rallies take place and where decisions on the future direction of the nation are approved.

What is acceptable in big cities ultimately seems to give a subconscious nod to what may happen in other parts of China. In the Hanyang district of Wuhan, a recently planned large-scale commercial and residential development has been designed to preserve three ancient buildings, each part of the history of the Church in the area. Their historical significance was enough to save them from demolition. An old church, a convent and a school of embroidery are therefore integrated into a project in which the French architect Hugh Dutton participates; the Louvre Museum in Paris being the location of some of his architectural designs.

In addition to work underway throughout this year to preserve the three ancient buildings, plans are in place to have a museum that will showcase the contribution made by missionaries in this part of China.

Colorful brochures and infographics already highlight what might be available to visitors in mid-2023. While ideas for possible exhibits are being discussed, a focus on the life of Columbanus co-founder Bishop Edward Galvin is emerging as a possibility for the new museum. His 30 years lived through contrasting eras in this part of China being an appropriate choice to highlight missionary experiences. Discussions between property developers and Chinese Church personnel continue in an effort to find suitable mission magazines, books, photographs and artifacts that would help present missionary history to the public.

The new museum is conveniently located at the intersection of two subway lines in the heart of the city’s Hanyang district. It is planned to be part of the former Hanyang Diocesan Sisters Convent and the setting is preceded by a public plaza and close to the large number of new apartments in the development. The planning for the museum is being done by people not traditionally connected with the Church, their efforts leading to what appears to be a positive presentation of Church life in this part of China.

In Old Testament times, the people of Israel understood God to be the God of history. Even in our time, the same vision of God remains fundamental, with events from generation to generation eventually revealing a pattern of meaning that touches the hearts of the community in unexpected ways. In such a perspective, it would seem that there is also room for a contribution to be made in China by the civil authorities who shed unexpected light on the history of the Church. For those with a deep concern for the life of the Church, there can be bewildered smiles as the civil authorities use their considerable skills to present the life of the Church in a meaningful way to the public. This is a new audience that otherwise would not have the opportunity to see the Church in such a positive historical unfolding.

Father Dan Troy is a member of St Columban’s Missionary Society. He lives in China.